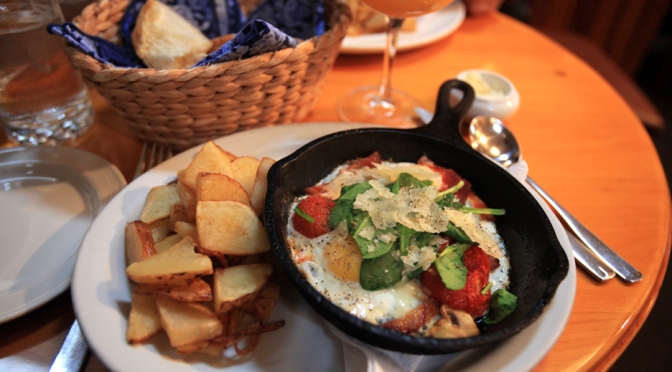 As much as it is nice to eat in for brunch like we shared about a little while ago, Kingston is a city that has no shortage of delicious places to eat out. Though we are trying to find more spots on the west end of town to dine at, there are tried and true establishments that remain in the downtown core.

This past Sunday, we went with our friends Gary and Joyce (their suggestion!) to Chez Piggy. Tucked away in a courtyard off Princess Street, this two-storey restaurant is absolutely quaint. We were seated upstairs in the loft, and throughout the meal, I dreamed about what it would be like to have a home that had as much character as this place. Kelvin and I had been to Chez Piggy together once for their Table d’hôte, and I had been once for a work lunch, but never had we been for brunch.

And let me tell you – Chez Piggy did not disappoint.

Gary and Kelvin both ordered the eggs benedict (sorry we didn’t take any pictures, and I couldn’t find the right ones online). I normally don’t like eggs benedict, but I would’ve eaten all of this. The eggs were just firm enough, and the sour dough didn’t get soggy at all.

Joyce and I both got the undone omelette (I got this photo off the internet…I forgot to take one). Because we are both not a fan of runny egg yolk, we asked for them to harden up the sunny side eggs, which they did a wonderful job of. The manchego was the perfect cheese for this, the arugula was a nice touch.

The icing on the cake? The homefries. I kid you not, those homefries were delicious. With crispy onions scattered amongst them, this was the perfect complement to our eggs.

We finished our meal fully satisfied, evidenced by our clear plates and beaming faces. The portions were just right, and reflective of the price. This is a definitely a place I feel confident recommending.

Usually Sundays are our unwind day. We’ll go to church in the morning and then we have small group or a Bible study at night. Those 6-7 hours in between are some of the most relaxing and, often, productive times that we have to do stuff around the house. Lately, and by lately I mean the past couple of months, we’ve been finding ourselves eating out for brunch quite a bit after church. 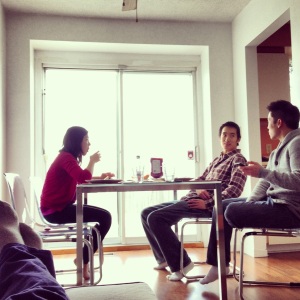 Now that Gary and Joyce are regularly attending our church we’ve had some additions to the brunch table and we decided that we should try to eat in every so often. 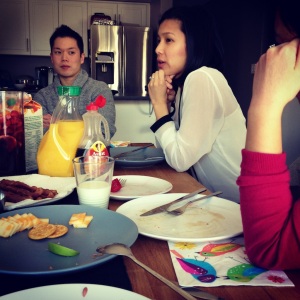 This past week we had our weekly brunch at Pat’s place. There was this crazy smorgasbord of waffles, breakfast casserole, bacon, fruit, and of course a cheese platter! Since joining our new small group at church I’ve realized how awesome cheese+fruit platters are and so at every “home” brunch I’ll try to put a simple platter out. I also tried making sangria for the first time. It did not turn out great. In hindsight I should have put more fruit juice (maybe try a lemonade next time) and less wine. Oh well!

Today, after a busy morning at church, K and I decided to head to Windmills for some lunch. Though we’ve been here before, we haven’t visited in quite a while. Interesting side note: Windmills was the first restaurant I ate in when I arrived in Kingston after I got my acceptance to Queen’s. I was in town with my family for SOAR, and we decided to come here for a quick bite.

Despite being close to 2 pm, the place was still bustling. Windmills has a very lively atmosphere in general. It’s a nice place for lunch or brunch, but we haven’t been for dinner because it always seems uncharacteristically expensive for what you’re really getting. For those of you who need (or just enjoy) alternative eating options, Windmills is a very accommodating place. There are vegetarian and gluten-free options. In fact, back in September when K and I decided to try out a holistic diet stint, we definitely contemplated stopping in for some gluten-free pasta.

The restaurant itself is somewhat awkwardly arranged, with bankettes, regular tables, booths, bar stools, and a whole assortment of seating options. It is also nice that they put up local art, which they do change every so often. I asked K if he thought anyone actually bought the art, and he said he would if he had $350 lying around. Unfortunately, we do not, so the pieces continue to hang artistically on the walls.

Also, for those of you who are interested, Windmills has a different deal every day. K and I aren’t really the wine-drinking types, so many of these deals don’t have much of a draw for us, but it’s worth a look!

In the past, we’ve given their breakfasts a try. They are generally quite tasty, though a little pricy for what you’re getting. The burgers also are not bad. Today, K got the Curried Chicken Wrap (9.95) and I opted for the Cajun Chicken Wrap (9.75). Both come with either a soup, salad, or fries. A solid deal for a filling meal.

This is the Cajun Chicken Wrap. The soup of the day was a cream soup with potatoes, broccoli, spinach, and some other veggies. It was nice and hot, with lots in it, but it fell flat in flavour. The wrap, on the other hand, was quite flavourful. However, as someone who eats her wraps by biting one side, then the other, I found it awkward to alternate between wet and dry sides of the wrap. I would definitely recommend trying to get a whole bite of the wrap to lessen the strange oscillation in texture. 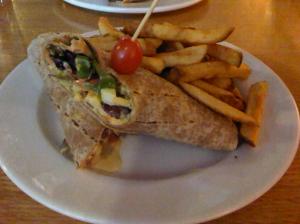 This is K’s Curried Chicken Wrap. The flavour was good, but it lacked a bit of chicken. The fruit in the wrap (particularly the grapes and the apples) added a nice crispness to the wrap, which K really liked. I tried a bit of it, but my bias still leaned towards the delicious curried chicken wrap at Aquaterra. The two really are not comparable. The fries were alright, and we appreciated that they retained their potato-y goodness despite being fried.

Windmills isn’t somewhere we would go regularly, but it isn’t all that bad either. We gave the joint a 3 for food, taking into consideration what we know of the place from our visits in the past. Try it out for yourselves when you get a chance. Windmills is located at the corner of Montreal and Princess (184 Princess Street).

A place to record our explorations