As I was clearing out my dropbox (I’m up to 3.5 GB now! Still nowhere close to Kelvin’s capacity, but it’s getting better…) I came across these two shots from when we were trying to accessorize our living room. 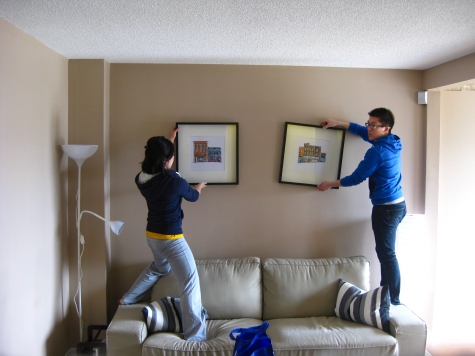 Is it just me or do we look really little in this picture? Anyways, those frames are from IKEA (Black Ribba frames!), and the drawings are just sketches I did of Princess Street, which is one of our main E-W arteries in Kingston. We took this picture by placing the camera on the stairs and setting it on a timer. Clearly I am more ready than Kelvin…or maybe he was asking me where I wanted it. In the end, we opted to put three pictures up instead of two, because we felt that two looked too empty. (In an interesting turn of events, Kelvin actually wants to get white frames now…) 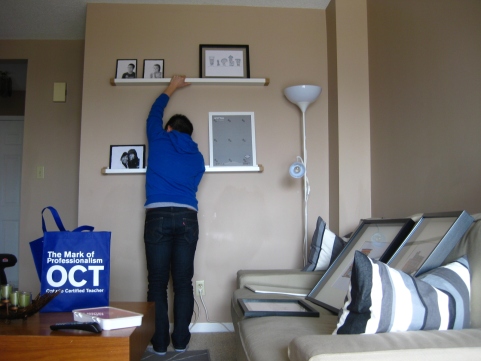 Now this is what we envisioned on our side walls – two levels of shelving to make for more interesting frame and picture combinations. However, once we put the three Princess St. sketches up, it was too heavy to put both shelves up, so we now only have one. The remaining shelf is still sitting in our hallway, waiting for a home.

A place to record our explorations